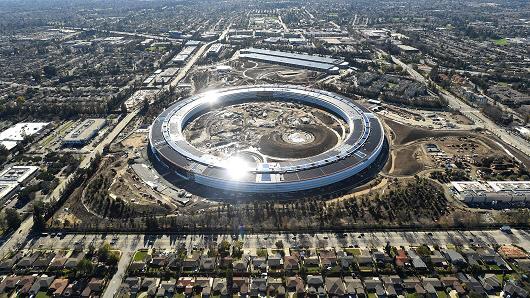 Running on solar electricity, requires no heating or air conditioning and surrounded by trees. That’s how you may define Apple Park, the new headquarters of Apple Inc.

Steve Jobs has started to work on a new campus over a decade ago, with a vision of creating a great workplace. A place where people create great products that can change the world.

It’s a 175-acre ring shaped establishment with a 2.8 million square foot main building encased with panels of curved glass. The worlds largest of this kind.

In the honor of Steve, a theatre is named after him. Steve Jobs Theatre hosted for the first time a special event last September 12. The unveiling of iPhone X, the future of mobile technology as they say.

Steve Jobs wants to inspire the 12,000 Apple staff (projected) but also the the environment, that is why they have planned and achieved an employee friendly facility in the most energy efficient building.

The Campus run entirely on renewable energy with 17 megawatts of solar rooftop and on top of that, it requires no heating or air conditioning for 9 months in a year.

It has a visitor center with an Apple Store, cafe which is open to public and a fitness center for all Apple employees.

The building is located at 1 Apple Park Way; Cupertino California and was officially opened April of 2017.

How to Make Your iPhone’s More Secure: 6 actionable Tips

How to Make Your iPhone’s More Secure: 6 actionable Tips